Build Up To It
chapter

Build Up To It

Tampa Bay is a culture-lover’s destination, thanks to architecture, history and arts influenced by a rich blend of backgrounds. From ornate Moorish minarets to sleek Modernist facades, this waterside city offers a wealth of diverse attractions, most located within easy walking distance of downtown. Follow me on an architecture tour that reveals the city’s diverse history and innovative future.

Walk it in downtown Tampa

Downtown Tampa stays up late with a festival

Our tour starts at Le Méridien Tampa, a 1905 courthouse converted into a luxury hotel. More than $30 million went into the top-to-bottom restoration of this Gilded Age beauty. Three-story-high Greek columns frame the entry, leading to the extravagant lobby, replete with crown molding above darkly veined terrazzo marble walls. The building boasts loads of details taken from the original structure and repurposed for today’s visitors. The original gold elevator doors lend a sparkle to the space, complemented by Sputnik-style chandeliers. The hostess at Bizou Brasserie, on the main floor, greets visitors from the courthouse’s former witness stand. The judges’ chambers are now guest rooms, while the old courtroom hosts parties galore. 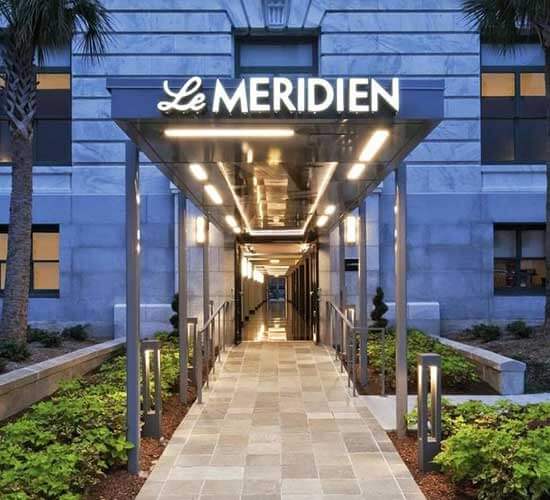 A short walk away, the sparkling blade-marquee of the Tampa Theatre has drawn in visitors since the theater opened in 1926. Famed designer John Eberson created a fantastical experience inside, framing the stage and screen with Mediterranean-style, balconied buildings under a faux twinkling night sky. Columned archways outline classical sculptures, and decorative lanterns give the air of a town square in Old Europe. The audience—then and now—is transported to another place and time by Eberson’s “atmospheric” design. The community saved this building in the 1970s, and it now hosts more than 600 events each year.

The Waterfront Arts District in Tampa Bay features an impressive collection of custom-designed buildings for the modern age. The Glazer Children’s Museum and Tampa Museum of Art were built at the same time but feel vastly different. The Glazer’s building bursts forth with color—bold yellow boxes project from the facade, and a mirror-and-tile mosaic by local artist Mari Gardner swirls toward the entry. Inside, the museum presents architectural design from around the world, including a pagoda, mud hut and a good old-fashioned fire station each made into a pavilion offering kid-centric activities. This three-story wonderland overlooking Curtis Hixon Waterfront Park is also a joy for the grown-ups, with 170 hands-on games and 17 themed areas for family fun. 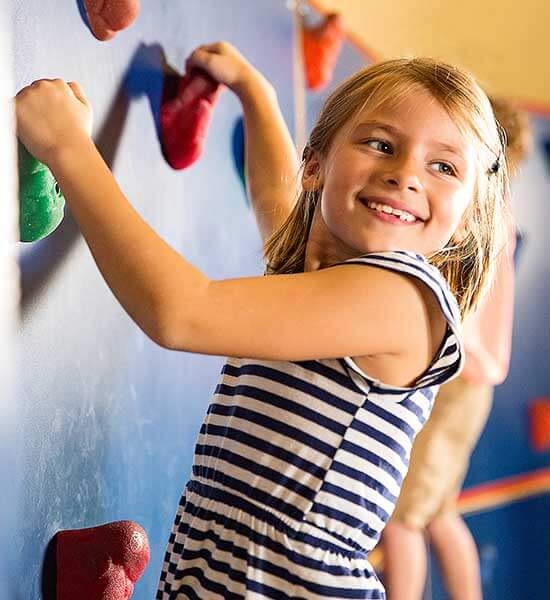 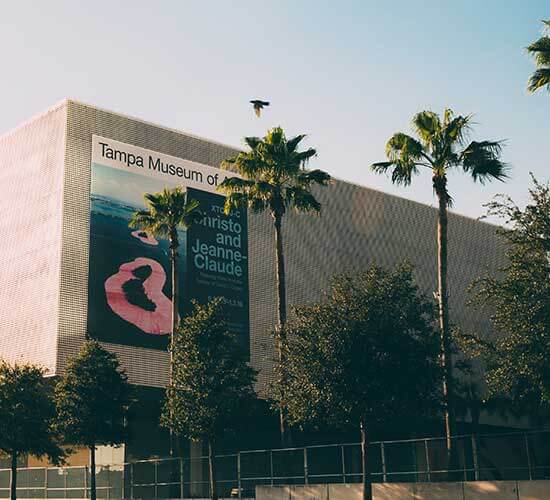 Stanley Saitowitz designed this innovative modernist building. The perforated metal jewel box containing the galleries is balanced above a clear-glass pedestal. The centerpiece in the soaring Morsani Atrium is a statement in “upcycling.” German artist Wolfgang Flad shredded art-texts (magazines, books, catalogs) to create a floating papier-mâché sculpture that reconnects the character of the fibers with the organic shapes of trees and branches. In the evening, Leo Villareal’s Sky: Tampa fiber-optic lighting changes the Tampa Museum of Art’s exterior aluminum into a rainbow of colors reflected on the Hillsborough River.

Cross the Hillsborough River and enter the Gilded Age at the old Tampa Bay Hotel. Architecture and history buffs will delight in this Moorish-style extravaganza, billed as “Florida’s First Magic Kingdom.” Opened in 1891, the opulent 500-room hotel hosted luminaries such as President Teddy Roosevelt. Charismatic entrepreneur Henry Plant built the structure for $3 million (about $75 million in today’s dollars). Architect John Wood provided a proliferation of keyhole arches, cantilevered balconies, gingerbread details and silver minarets capped by crescent moons. In 1933, the University of Tampa moved to the building and the Henry B. Plant Museum was established. A handy audio-tour describes resort life at the turn of the century and features original furnishings from the hotel.

Tampa Bay’s mix of architecture styles flows into the surrounding neighborhoods. Ybor City dates back to 1885 and once served as the Cigar Capital of the World, producing hundreds of millions of cigars every year. The town was founded and largely built by immigrants, who combined visions of Cuban, Spanish and Italian architecture with an American Main Street flavor. The brick cigar factories and storefronts, abandoned and in disrepair after the cigar industry collapsed in the 1930s, are now a vibrant commercial district. The beauty is in the architectural details that remain—decorative cast-iron balconies, mosaic-tiled entryways, “gingerbread” wood screens, arched windows and sculptural cornices capping it all off. 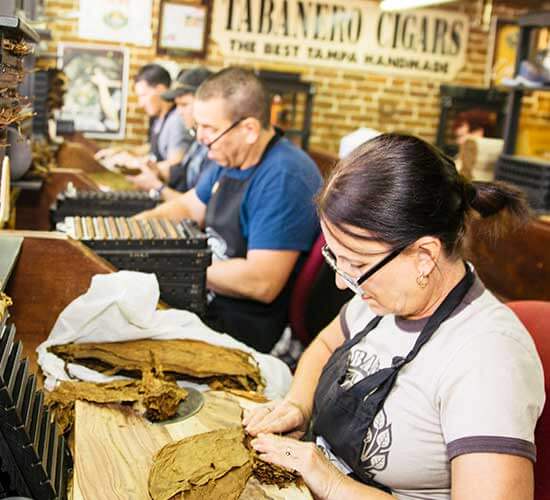 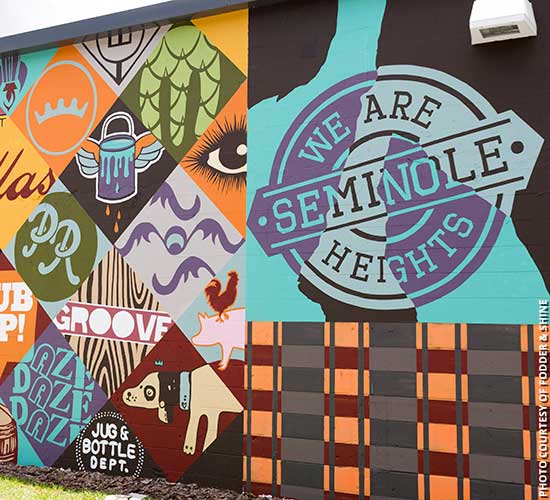 One of Tampa Bay’s first subdivisions, Seminole Heights was developed in the early 1900s during a real estate boom. It’s bursting with an array of distinctive bungalow-style homes. The laid-back residences have pedigrees from the Arts & Crafts-era (marked by a return to natural building materials, such as stone and wood), and a smattering of Mediterranean Revival houses. Architects of local churches and schools tapped into the Gothic Revival for community buildings for contrast, with pointed arches and steeply gabled roofs rising above the clusters of cozy houses.

Located just south of downtown Tampa, the Ballast Point area centers around Ballast Point Park, developed in 1894 as a sophisticated trolley stop. The park was formerly named for Jules Verne, who chose “Tampa-Town” as the launching site for an imaginary rocket in his 1865 science fiction novel From the Earth to the Moon. Today’s visitors can still enjoy the original Asian-inspired gazebo at the site, or spend some time at the Tampa Yacht and Country Club, founded in 1904. Make sure to meander down Bayshore Boulevard and note the elegantly appointed homes that line the roadway, including Queen Anne manors and high-end Modernist mansions. 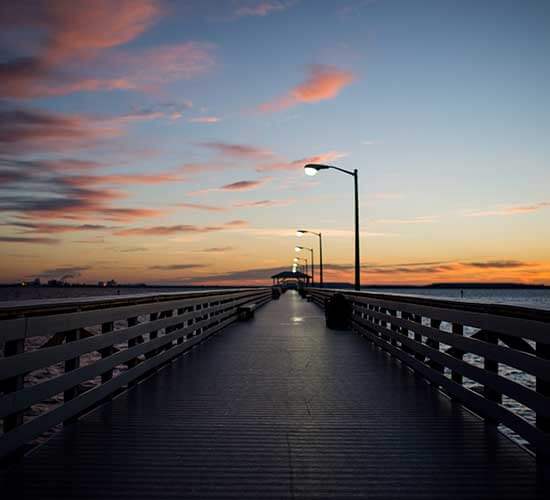